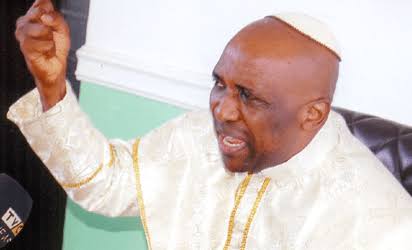 When Primate Ayodele released a prophecy about Nigeria’s Taliban-like sect, many thought he wanted attention or just spoke out of his human knowledge, little did they know that God was speaking through him as HE normally does about the affairs of nations.

The name ‘Taliban’ became popular when they took over Afghanistan from the government in a well-coordinated attack against the president of the country even though Primate Ayodele warned long before this unfortunate incident came to pass.

Shortly after this operation, Primate Ayodele released a prophecy that he foresees a Taliban-like sect taking over some states in the north and he specifically mentioned those states. He mentioned Borno, Yobe, Adamawa, Nasarawa, Bauchi, Kaduna, Plateau, some parts of Benue and Kogi states.

‘‘’I am seeing a sect like Taliban coming up Africa, they are coming in a big form to attack African countries like Burundi, Mali, Central Africa Republic, Benin Republic, Chad, Niger Republic and Nigeria.’’

‘’It will be very serious, they are already gathering together and they want to take over some states in Nigeria, namely; Borno, Yobe, Adamawa, Nasarawa, Bauchi, Kaduna, Plateau, parts of Benue and Kogi. This is a warning the government should work on immediately. I’m seeing them planning, strategising on attacking Africa and Nigeria’’

It’s barely a month since he made these prophecy and we are already seeing the operations of a Taliban-like sect in these states. Just last week, an Islamic group like Taliban; ISWAP operated in Borno state and destroyed one of the major high tension in the state, putting them into darkness.

Just yesterday, the same ISWAP operated in Yobe state, laid ambush for military men and killed several citizens in an unfortunate attack. As we can see above, Borno and Yobe states are part of the states Primate Ayodele mentioned. Funny enough, they followed each other sequentially as he mentioned them.

The serious attack Primate Ayodele talked about in his prophecy is definitely going to be bigger than this but just like Taliban started with some attacks here and there, ISWAP has started too. If the government fails to listen to these prophecy and do the needful regarding security, it may be a disaster for them.