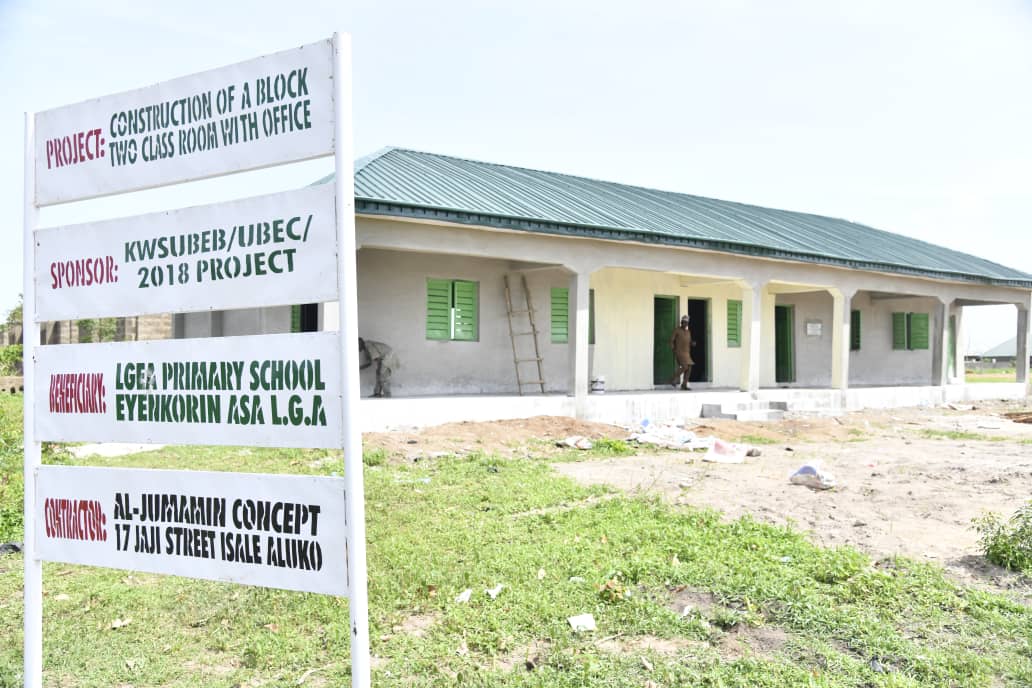 The Government of Kwara State wishes to respond to a picture and story published on the Sahara Reporters’ blog on Thursday May 19, 2022. This clarification is made for the purpose of well-meaning citizens who we feel deserve to know.

First, a key feature of pre-2019 basic schools in Kwara State were instances of children learning under trees or sitting on bare floor, among others. This is due to many years of lack of meaningful investment in these schools. As Sahara Reporters rightly observed, Kwara was on a national blacklist between 2013 and 2019 because of mismanagement of UBEC grants by the previous administration. The effect was the horrible state of infrastructure and common sight of children learning under trees.

The administration of Governor AbdulRahman AbdulRazaq has admittedly been invested with the responsibility to fix these schools along with other rotten public infrastructures it inherited across the state. However, it is basic that school structures that have collapsed or dilapidated over the last one decade cannot all be fixed at once. This will take years of consistent investment and monitoring.

The new administration paid a whopping N7.1bn counterpart funds for years 2014, 2015, 2016, 2017, 2018, and 2019 to access the UBEC matching grants for those years. This money, according to workplan agreed with the UBEC, will rehabilitate, remodel or reconstruct identified classrooms across 605 locations in the state, build digital literacy centres in 40 designated places, supply furnitures, provide boreholes, among other specifications in the UBEC plan.

But even after all the projects listed in the action plan have all been fixed, we are certain to still have a litany of classrooms that require rehabilitation or renovation due to long years of criminal neglect of the basic education in the state.

Specifically on the Asa LGEA School Eiyenkorin where a picture of school pupils learning under the tree was shown, a careful study of the image shows in the background a block of classrooms and one office under construction in the school. It is at the stage of plastering. That is among the 2018 projects that are ongoing in many locations across the state. That phase of the projects began this year according to the work plan agreed with the UBEC. Apart from that, the government has supplied 60 units of student furnitures to the same school this year.

Again, a careful study of the picture published by Sahara Reporter shows that the pupils were sitting on a well-paved concrete base. Upon it now stands one of the 10 mobile classrooms that the UNICEF donated to the Kwara State Universal Education Board. Obviously, Sahara Reporters had taken the picture before the mobile classroom was mounted on the base that was still healing after construction.

Similarly, the school has also been penciled down for one of the UBEC direct intervention projects which are expected to begin in July/August 2022.

The above, especially the block of classrooms under construction in the school as seen in the picture published to denigrate the state, shows that Sahara Reporters was misinformed and therefore not fair to the administration as it created an impression that nothing was being done in the school despite the UBEC grants that were recently accessed by the state. We are afraid that intentional misrepresentation of facts, like the one concerning Asa LGEA School Eyenkorin, is not the purpose of citizen journalism to which Sahara Reporters often lays claim. We urge them to be more meticulous in future reportage.

While the government of Kwara State will not relent in its duty to rebuild the state from the ruins of the past, it is also important to state that rebuilding efforts happen in phases and reasonably take years of huge resources and consistency. Therefore, the-over-2000 dilapidated school structures inherited from the past can’t all be fixed at once, especially by an administration that has its hands fully engaged with fixing the equally mountainous rots it met in other sectors of the state.