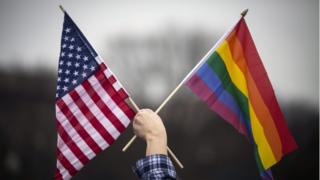 The US has announced it will deny diplomatic visas to same-sex partners of foreign diplomats and United Nations employees.

The change went into effect on Monday, giving partners currently in the US until 31 December to leave, get married or otherwise change their visa.

It is a reversal of rules introduced in 2009.

The memo states: “As of 1 October 2018, same-sex domestic partners accompanying or seeking to join newly arrived United Nations officials must provide proof of marriage to be eligible for a G-4 visa or to seek a change into such status.”

G-4 visas are granted to employees of international organisations and their immediate families.

According to the State Department, “only a relationship legally considered to be a marriage in the jurisdiction where it took place establishes eligibility as a spouse for immigration purposes”.

In a 12 July note to the UN, the US Mission to the UN lauded the change as a step towards equality, saying “same-sex spouses of US diplomats now enjoy the same rights and benefits as opposite-sex spouses”, US media report.

But critics have called the move unfair to homosexual partners, given a large number of countries do not recognise same-sex marriage.

Former US Ambassador to the UN Samantha Power decried the policy, calling it “needlessly cruel and bigoted”.