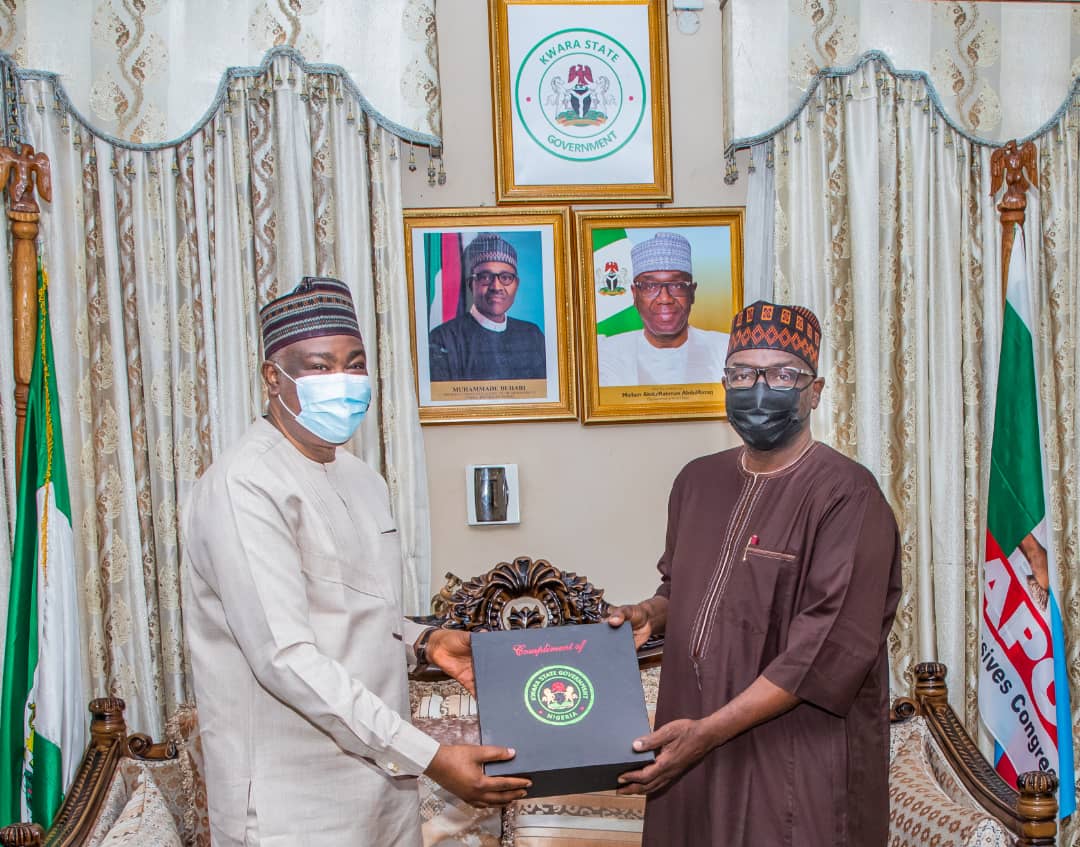 Kwara State Governor, Abdulrahman Abdulrazaq has stated his administration met a we met a collapsed State in 2019.

Governor AbdulRahman Abdulrazaq made this disclosure on Monday when he received top APC chieftain Gbenga Olawepo-Hashim in Government House.

He alleged former Senate President, Bukola Saraki of collapsing Kwara State like he did to a commercial bank

The Governor said his idea of good governance is to ensure that the state ticks the right boxes in human capital and infrastructural development such as access to quality and affordable basic education, healthcare facilities, equal opportunities through gender inclusion and youths empowerment, strengthening microeconomic base, and equitable wealth distribution.

“The opposition keeps shouting they have not seen our legacies projects. It is not about legacy projects. We will not abandon dilapidated schools and hospitals and start building new ones. We will fix those schools and hospitals. That is the (decent) way to move forward. People really understand that we met a collapsed State, exactly the way their leaders collapsed a bank and moved to the state and collapsed it. That is exactly what has happened,”

“You just need to go to our schools and see. At the level of funding we have, it will take us fifteen to twenty years to get back to restore the lost glory of twenty years ago. When we came in, colleges of education that train the teachers were on strike for one year. They were being owed #
N750million we cleared everything and ensured their courses were accredited all over again, and things have been moving forward.

“They had not accessed UBEC Fund since 2013. We keep emphasizing this because they seem to have forgotten. We are not forgetting. UBEC gives an average of N1billion to every state and expects you to put N1billion in. So that guaranteed N2billion into education sector. In 2013, they asked us for our own N1billion and the past government went to borrow it. UBEC (in turn) gave them N1billion and so they (government) returned N1billion to the bank and stole the UBEC fund. They shared it among themselves. What they don’t understand is that we are not pursuing them (yet) because we want to quickly fix things for the people. We can (still) jail them for that. It is diversion of public funds.”

The Governor said his administration has done far better than what he inherited, adding that opposition’s propaganda and other distractions are dead on arrival.

He said it was laughable to hear certain senior figures of the past administration talking about good governance when they left collapsed basic education and health sectors.

“I wished we took over from a responsible government that put (basic) things in place. Alas, we are putting the foundation and starting all over; every sphere of governance – in basic education, healthcare and other sectors of governance. For example, issues like child healthcare kwara was leading in stunted growth / malnutrition. Why should that be? We can also trace that to the fact that Kwara did not subscribe to basic things including the school feeding programme that could have mitigated the effect of malnutrition. It is a callous thing to do,” he added, saying the administration had since done its part in attracting the programme to the state.

Olawepo-Hashim, for his part, commended the Governor for sticking to the reasons for his coming into politics since 1998.

He lauded the efforts of the governor in gender inclusion and youths empowerment, saying the Kwara administration is setting the pace nationwide.

Olawepo-Hashim said Kwara will not go back to the dark era it exited in 2019.

“There is no governor in Nigeria that has done what you have done for the youths and women, especially in terms of giving them the space for leadership in your administration, as we have seen in your cabinet and other key appointments. Young people are inspired by this. I have worked before as a youths activist and therefore I know the value of what you have done. Because essentially this is the core of the challenge for democracy in our Country. That democracy must reflect the composition of the society, and you have set this standard. I just want to say congratulations on this,” he said.

He applauded the present government for being committed to repositioning education sector, saying such step aligns with what they both thought of while clamouring for a new Kwara more than two decades back.

“Secondly, I am impressed by what you have also done for young people by getting good teachers for them, who were recruited on the basis of competence. One of the young women who participated as a civil society activist in the recruitment exercise briefed me. I didn’t just read on the pages of newspapers. I have been speaking to people. And I am convinced that this is essentially what we put ourselves together twenty something years ago to change the face of Kwara. I am happy at what I am seeing, so I just come to say God bless you. May God continue to protect and inspire you on a direction to deepen this programme that Kwara has desperately needed.”

Olawepo-Hashim, a former presidential candidate, said Kwara will never go back to an era of dictatorship, hoping whatever rancours that are currently within the ruling APC will soon be resolved amicably.