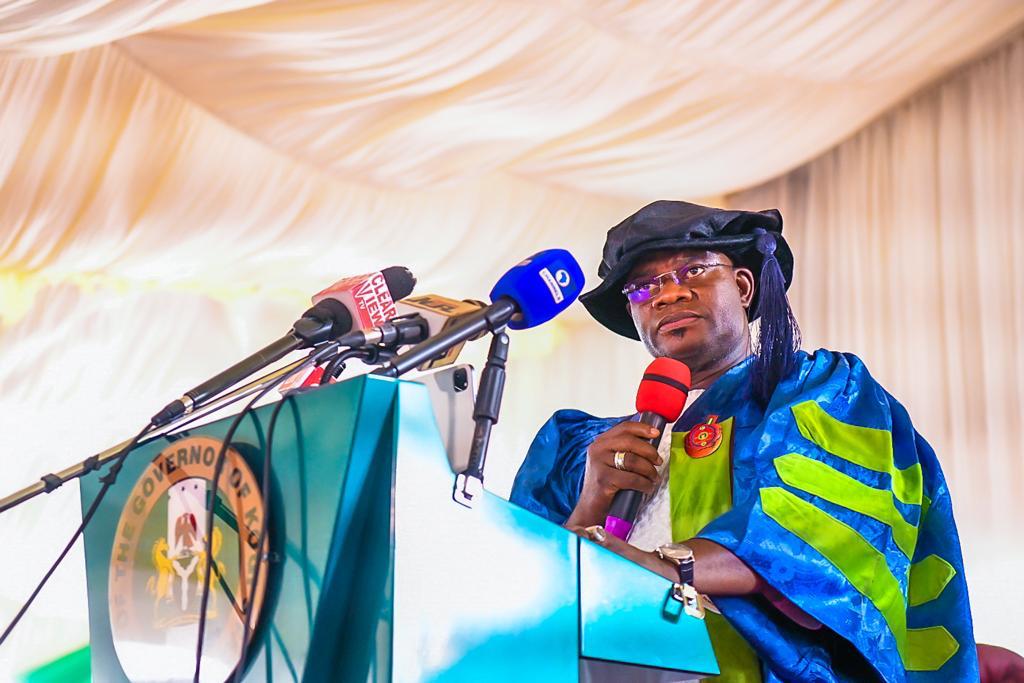 Kogi State Governor, Alhaji Yahaya Bello has said the goal of his administration for its newly established university, Confluence University of Science and Technology (CUSTECH), Osara, Kogi State, is to make it a world class citadel of learning that will groom graduates grounded in science and technology.

He said this on Thursday during the maiden matriculation ceremony for pioneer students of the university held at Osara, Kogi State.

The governor described the matriculation ceremony as a watershed in the history of educational development of Kogi State.

He said his administration was greatly disturbed by the painful experiences of hundreds of Kogi youngsters who were unable to pursue careers in Science and Technology due to very limited openings in universities outside Kogi State, hence, the establishment of CUSTECH.

“We found that even with impressive scores in the Unified Tertiary Matriculation Examination (UTME), cutthroat competition for limited spaces and unfavorable catchment considerations usually put our children at a greater disadvantage.

“Over the years, access to such programmes as Medicine & Surgery, Pharmacy, Architecture, Engineering and others in this category kept dwindling for Kogi secondary school leavers.

“This trend became so worrisome that we just had to act as a Government to bring it to the only logical end. Problems make me combative for solutions. It is my default mindset that leaders exist to find solutions to the problems of those they lead or they lose their moral authority to leadership. It was thus my duty and the duty of my Administration to solve this particular problem too for Kogites using all the resources of Government at our disposal.

“Accordingly, and in line with the Administration’s avowed commitment to providing a wide spectrum of educational opportunities for our younger generations, we decided to take action by establishing a specialised university of our own, dedicated to science and technology. Not only was this action imperative but it was also very much in sync with best practices in educational progressivism all over the world.

“In fact, we were so driven by the need to reduce the pains of our young ones as quickly as possible that we may have set a record for the shortest gestation period ever in the history of Nigerian universities”, he said.

He said the goal of his administration was to ensure the university becomes a world class citadel of learning and can compete favourably with its peers in any part of the globe.

“In establishing CUSTECH, our ultimate goal is to achieve a world-class citadel. It was designed and built to provide first-grade training in Science, Technology, Engineering and Mathematics (STEM) disciplines for our youth.

“By leveraging ICT and artificial intelligence (AI), it is our plan to rapidly move the institution forward till it becomes comparable to similar schools anywhere on the globe.”

“When I talk about making this school at par with its peers across the world, I do not refer to academic output alone. Indeed, not long ago we flagged off the commencement of works on more physical facilities for the first phase of the Campus development.

“This phase will deliver the University Senate Building, the University Library, Faculty of Engineering, Faculty of Computing and Informatics, and Faculty of Basic Medical and Health Sciences. This Administration is also building a massive Reference Hospital in Okene which will be equipped with facilities which any ultramodern tertiary health institution would be proud of.

“It will be equipped for the diagnosis and treatment of most diseases prevalent in Nigerian society. When completed in the next couple of months, it is projected to be one of the best among its kind in the country. We are also designating it to provide Teaching Hospital services to this great institution.

“We are pleased to remark here that CUSTECH has just received a boost from the Tertiary Education Trust Fund (TETFund) for both physical and academic developments on campus. This support will help us achieve our desire to make this university of international standard all the more faster”, he said.

Speaking on the government’s choice of location for the university, he said it was “substantially guided by the principles of fairness and equity, succinctly captured under our EBIGO policy and philosophy. Hitherto, the Eastern and Western Senatorial districts already have the Prince Abubakar Audu University, Anyigba, and the Federal University, Lokoja respectively. Thus, for geographical balancing, the Central Senatorial District easily had the strongest case. God knows that if the situation was otherwise I would not have hesitated to plant this school where equity demands.”

He assured that for as long as he will be governor, he would ensure all the institutions are fully supported and strengthened to achieve the greatest heights possible in their core competencies.

The governor charged the newly matriculated students to consider the opportunity delivered to them to study at CUSTECH as “golden and priceless.”

“You are the lucky pioneers of generations of young Nigerians who will pass through the portals of this great institution and come out reconstructed into Changemakers for our nation and our world.

“Your admission into this set has put much responsibility on you to excel in character and learning in order to justify your place in this Honour Guard of history. You must therefore cherish what you have here and allow it to guide you into the path of greatness.

“Remember that education has always been nationally acknowledged as the niche of Kogi indigenes and sustain that record with superlative performance”, he said.

“So far, you have all proven that we did not make a mistake in your appointments. Keep it up and we shall have no problems. I am challenging management to produce graduates for us in this first batch of students who are so excellent at what they do that future generations of students will be sought after from all over the world even before they graduate. In or out of Government, we want to have that great sense of fulfilment which will come from seeing CUSTECH graduates taking the driver’s seat in national and international development”, he said.

A total of 245 Students were matriculated on Thursday by the management of the institution.