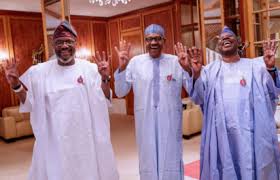 PRESIDENT BUHARI WILL CAMPAIGN FOR ALL APC CANDIDATES

President Muhammadu Buhari has reiterated that he will campaign for all APC candidates in this year general elections.

Buhari in a statement issued on Sunday by Senior Special Assistant to the President on Media and Publicity, Garba Shehu said he however welcomes support and endorsements for every strata of the country.

He therefore urged the media and other Nigerians not to confuse courtesy calls or offers of support from citizens including candidates flying the flags of other parties as endorsements of their candidacy.

“Following repeated media enquiries on the matter, the Presidency wishes to state in clear and unmistakable terms that as a party leader and a candidate on the platform of the All Progressives Congress (APC) in the coming elections, President Muhammadu Buhari will campaign for the party and all its candidates.

“This however does not mean that he, as the nation’s leader, will decline courtesy calls or offers of support from citizens including candidates flying the flags of other parties.

“There is no doubt that the President has no competition here in terms of popularity in the coming elections. But the more support he gets, the wider the margin of victory there will be.

“So please let there be no confusion about this. President Buhari is APC. He will campaign for all APC candidates, but he welcomes support and endorsements.”

Recall that preferred aspirants of Governor Ibikunle Amosun and his Imo state; Rochas Okorocha fails to get APC governorship ticket, and their proteges have decamped to other political parties.

In Ogun state, Amosun has promised to work for Abdulkadir Akinlade of APM while Okorocha is rooting for his son-in-law, Uche Nwosu, the candidate of Action Alliance Party.