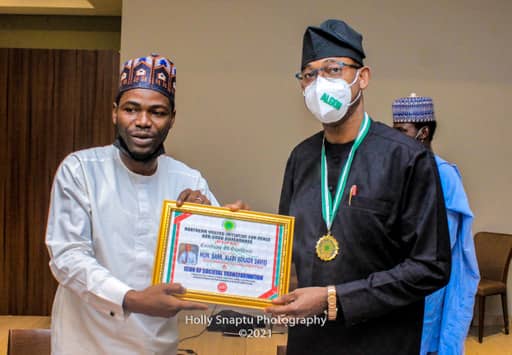 According to Faruk, he listed destintive qualities that the ALGON National President has exhibited tirelessly in the course of leading ALGON and as Council Chairman. He said reward for excellence has become a component of character moulding for Nation Building of which the youths association covering the 19 Northern states has incorporated in it’s programme for leadership and promotion of development.

Receiving the Award that, National President of ALGON described the Award and Honour as motivating for further service. He dedicated the Award to all Nigerian Youths at the Councils and Local Governments. He said that as a beneficiary of youth, he is happy that the Group embarked on such gesture and is willing to continue to partner with the Youths of which ALGON has been in the for front since his assumption of duties as the National President. He thanked the Northern Youth and urged them to continue to develop programmes that will unite them from the north to south to bring about peace, unity and development. He said that ALGON is deeply pained by the way the youths are involved in alcoholism, banditry and kidnapping. He used the occasion to call on them to retrace their steps and pledged to work more closely with the youths.