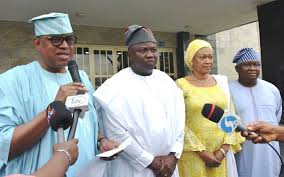 The Screening committee of All Progressives Congress has disqualified other aspirants seeking to contest Lagos senatorial seat with current occupiers.

The outcome of screening exercise means party members will only affirm at their nomination during the primary election slated for Wednesday.

Remi Tinubu and Gbenga Ashafa have being in the Senate since 2011.

Recall that Senator Solomon Adeola had earlier returned to his state-Ogun to contest for governor but faces resistance from Governor Ibikunle Amosun and some party leaders.