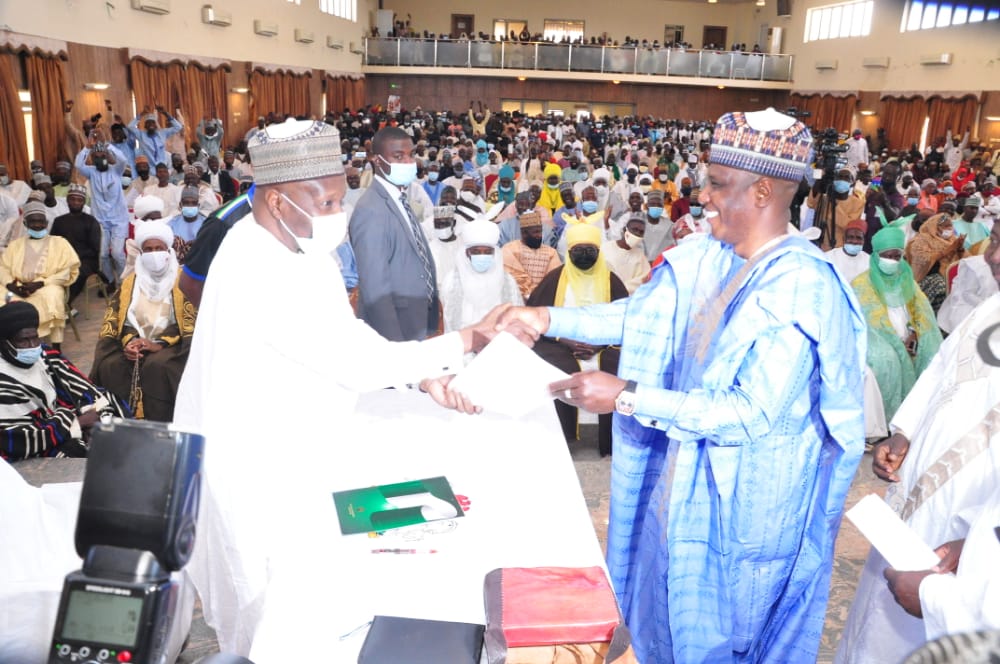 Governor Muhammadu Inuwa Yahaya said the recent cabinet reshuffle and reassignment of some portfolios undertaken by his administration was carried out to rejig and further consolidate on the mandate given to him by the people of the State.

The Governor was speaking shortly after swearing in 3 Commissioners to fill in the vaccum created as a result of the recent cabinet reshuffle which saw Barr. Audu Mela Nunghe (SAN), Elhassan Kwami and Dr. Mohammed Gana being relieved of their appointments.

Governor Inuwa Yahaya congratulated the newly sworn in Commissioners and enjoined them to discharge their duties to the best of their ability for the wellbeing of the people of State.

The Governor equally thanked the past Commissioners for their service to Gombe State and wished them success in their future endeavours.

“Let me sincerely appreciate the Right Hon. Speaker and members of the Gombe State House of Assembly for the timely screening and confirmation of the new nominees as Hon. Commissioners, this is in line and in tandem with the manner the Hon. House has always collaborated with us to take the State to greater heights”.

He assured the Legislative arm that his administration will continue to collaborate with them as they discharge their constitutional responsibilities for the betterment of the state.

“We are all aware of the dwindling allocation from the Federation account occasioned by decrease in oil revenue as well as the effects of covid-19 Pandemic which also negatively affected the pace of our development”.

The Governor however said in order to ensure the prudent management of available resources and extract maximum benefits from every naira the State earn, his administration will continue to run and focus on transparent and accountable Government.

To the newly sworn in Commissioners, Governor Inuwa Yahaya charged them to stir the affairs of their respective ministries with the fear of God, calling on them to bring their wealth of experience and proven integrity to bear in the discharge of their duties.

He also requested the newly sworn in Commissioners to work in harmony with their Permanent Secretaries and members of staff so as to ensure that Government programmes and policies are implemented accordingly.

“Let me also call on civil servants and the entire people of Gombe State to give the newly sworn in Commissioners the necessary support and cooperation in order to consolidate on the gains made by this administration”.

He called on the people of the State to be patient with the Commissioners because of the constraints brought about by the economic challenges and the realities of the day.

The Governor said his administration will not relent in its efforts to transform the State saying the numerous development strides been carried out in the State attest to the commitment of the State government to impact positively on the lives of the people of the State.

The newly sworn in Commissioners which include Christopher Abdu Buba Maisheru, posted to Ministry of Special Duties, Abdullahi Idris Kwami to Ministry for Housing and Transport and Abubakar Aminu Musa to Ministry for Youth Development.

Earlier speaking the Secretary to the Gombe State Government, Professor Ibrahim Abubakar Njodi informed those present at the occasion that the swearing in of the 3 Commissioners came as a result of the vacuum created by the recent cabinet reshuffle aimed at charting a new course for the administration.

Abdullahi Idris Kwami who responded on behalf of the new Commissioners assured Governor Muhammadu Inuwa Yahaya of their loyalty, commitment and dedication to duty.

The event was attended by government functionaries, traditional rulers, hundreds of family members and well wishers who turned out enmasse to rejoice with the newly sworn Commissioners.