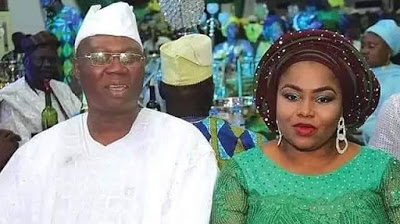 This would be the couple’s second child – The couple had their first child on Sunday, April 8, 2012 the national coordinator of the oodua People’s Congress Gani Adams has welcomed a beautiful baby girl with his wife Mojisola Adams.

It was gathered that the beautiful baby girl’s arrival was announced on Tuesday, August 29 by his Personal Assistant, Prince Segun Akanni.

It was also reported that both the mother and child are doing well. The couple had their first child after nine years of marriage on Sunday, April 8

Erelu Mojisola Adams who was sighted pregnant during her husband’s 47th birthday in April was seen showing off her baby bump.