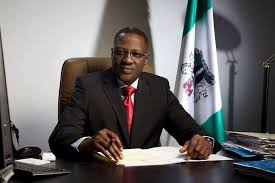 Governor AbdulFatai Ahmed of Kwara State in his second term inauguration speech on May 29, 2015 highlighted some infrastructure development projects that his administration would carry out in continuation of shared prosperity agenda in the state.

His words: “As you are aware, urban electrification not only enriches the aesthetics of our cities, it also enhances the security in our neighborhoods. We will therefore upscale the existing urban electrification programme with solar streetlights along major access roads in Offa, Omu-Aran, Lafiagi, Patigi, Kaiama, and Share-Tsaragi and restore existing public-powered streetlights across the Ilorin Metropolis. Still in the power sector, we shall complement existing investment strategies with the establishment of a 100-megawatt Independent Power Plant in Kwara North.

“Apart from industrial clusters, the 100 megawatts will also power essential services such as hospitals, government offices, and educational institutions. Our planned infrastructure development will also cover sports sector where we will renovate and equip the Kwara State Indoor Sports Complex in line with global standards in sports infrastructure.

“In working towards these targets, I will build a team of experienced men and women who share our vision and are prepared to put in the hard work necessary for the task ahead.

“Many of you must wonder how we intend to fund these projects and programmes in view of the sustained reduction in allocation to states. The answer is simple.  In the coming months, we will begin the process of decoupling our economy from a reliance on the unstable global oil market and the associated fluctuations in federal allocation. We will achieve this admittedly challenging task by significantly improving internally generated revenue. We will also plug leakages and reduce the cost of governance to boost our capacity to achieve these objectives.”

Gov Ahmed championed the establishment of Kwara State Internal Revenue Service (KW-IRS) with aim of increasing the Internally Generated Revenue and block leakage associated with previous system of revenue collection in the state. Without doubt the KW-IRS has being the major backbone of the state of harmony economy development despite the economic recession in Nigeria.

In bid to properly utilize fund generated by KW-IRS for the benefit of kwarans and it residents , the Kwara State Government in September 2016 launched Infrastructure Development Fund ‘InfraFund Kwara’, (IF-K) to fast track the development of every part in Kwara state.

IF-K was codified into the Kwara State Public Private Partnership Law which the governor signed into law in 2015. The IF-K was initiated to address estimated N225 billion deficit value of infrastructure across all the 16 local government areas and spanning all sectors.

It’s therefore imperative for government to design long term plan to address the infrastructural deficit and partner with private investors to boost the state’s productivity and wealth creation.

The resourceful governor of Kwara state while launching the scheme said the main objectives of IF-K were to provide guided, systemic and outward facing framework for continuous and consistent infrastructure development, optimally leverage private sector or resources for infrastructures development and maximize the state’s resource allocation policies.

The Chief Economic Assistant to Governor Ahmed, Abayomi Ogunsola disclosed that the fund would boost raise confidence in investors and encourage broader and deeper interactions with the Kwara State government from different types of private or non-private partners.

In less than a year, Kwara State has turned to construction site as contractors are working on all ongoing projects across the state because they are sure of recouping their investment through the lofty initiative of Gov Ahmed. The state of harmony is marching forward despite the significant reduction in monthly revenue of the state from federation account.

The ongoing construction of Geri-Alimi Diamond underpass, KWASU campus in Ilesha-Baruba and Ekiti, KWASU Post-Graduate School in Ilorin and dualisation of Kulende-UITH-Oke Ose road project are going on as planned with IF-K.

Other projects under IFK include dualisation of Michael Imodu-Ganmo road, Light-Up Kwara Project (LUK) renovation of Indoor sport hall of the Ilorin Stadium among others.

Kwara state is not the league of states tagged ‘salary paying” government, as the economic recession in the country has limited some states to only pay workers’ salaries and neglected infrastructural development which is critical index to measure good governance.

The laudable scheme is not beneficial to government and contractors alone, but also to citizens who will enjoy the infrastructure and workers of companies handling the projects that will be empowered to take care of their family.

Many people have been and will be productively engaged on various construction sites, thereby reducing the problems of youth unemployment in the State.

The success story of IF-K in Kwara State indicates that the future of the state is bright, as never again will projects be abandoned by government or contractors. Other state governors can also adopt the concept to fast track the development of their respective states.